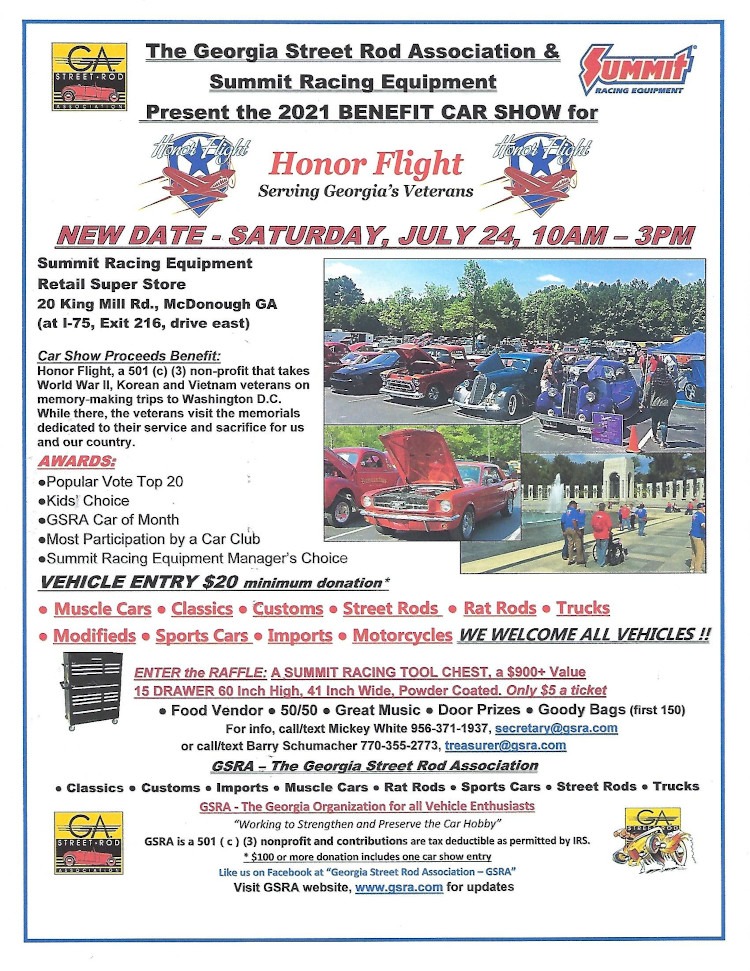 Summer weekends in Atlanta always produce a bevy of car events that duke it out for our attention.
But when Georgia Street Rod Association (GSRA) has their annual Honor Flight show, we know where we’re headed.

For years, GSRA has answered the call and supplied unwavering support for our veterans through their Honor Flight benefit car show.
This year was no exception.

Among the many activities on tap was a raffle for a Summit Racing tool chest. Valued at over $900, it garnered the attention of many.

The drawing will be held on October 17th at the Summit Racing Equipment Atlanta Motorama, Atlanta Motor Speedway.

And yes, we do mean multitude. 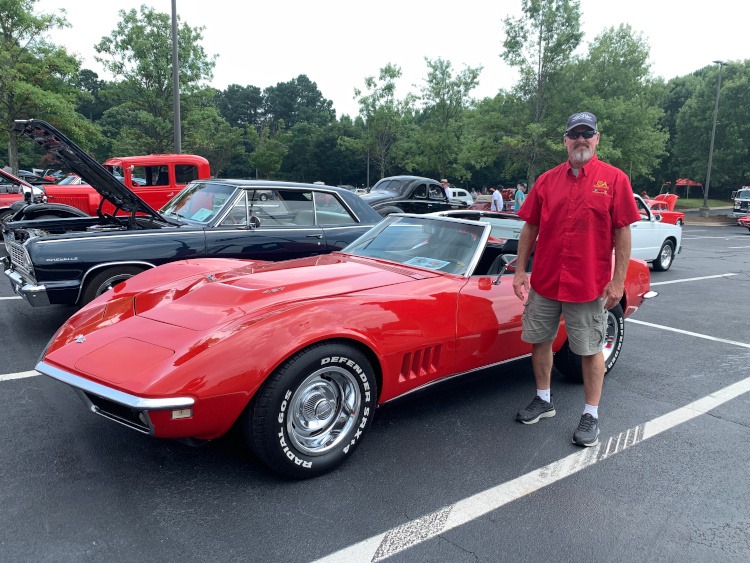 The event was in full swing when we arrived, and the parking area was reaching near capacity. The Georgia Street Rod Association (GSRA) has decades of experience and an active base of over 500 members to organize events of this size.

Judging by the crowds, they were going to need it.

To get the inside scoop on the inner workings of the show, we tracked down the always energetic Tina Schumacher. Tina’s the editor of GSRA’s in-house print & digital magazine, StreetTalk. 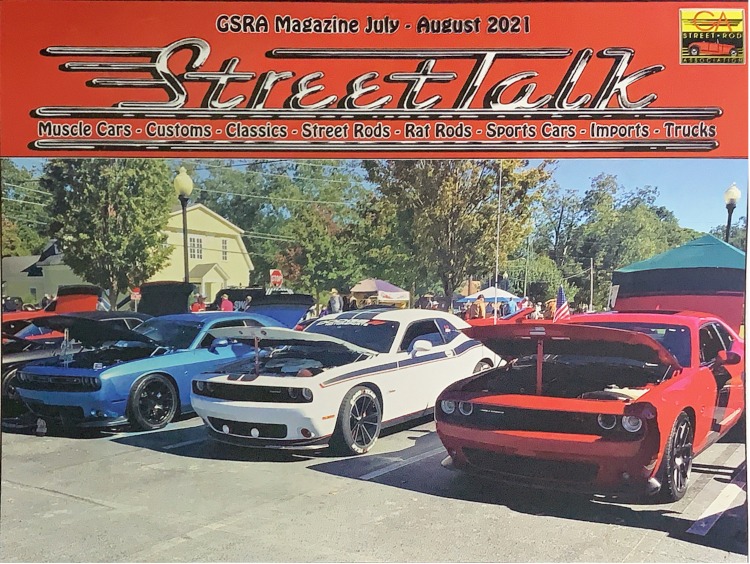 Rod Worley – Editor – Tina, we were excited to see such a strong turnout to support our veterans at the Summit Racing Equipment Retail Super Store. Do you have the car registration numbers?

Rod Worley – Judging by the turnout, this had to be an intense sales day for Summit.

Tina Schumacher – I would say yes, judging by the number of shoppers walking back to their cars with bags and boxes of Summit merchandise.

Rod Worley – As I recall, GSRA has been raising funds for Honor Flight for several years. Could you briefly share what Honor Flight does and how long it takes to plan an event of this size?

Tina Schumacher – This is the sixth year that GSRA has raised money for Honor Flight, the non-profit that takes WWII, Korean and Vietnam veterans on a trip to Washington DC to see the monuments honoring their service to our country.

The 2020 show was Covid canceled, but we still were able to raise money and send donation checks to Honor Flight-Conyers and to Middle Georgia Honor Flight.

As far as planning goes, it takes about four months. We have the basic plans in place, and then right after each show, we review what worked and what should be changed for the next year. 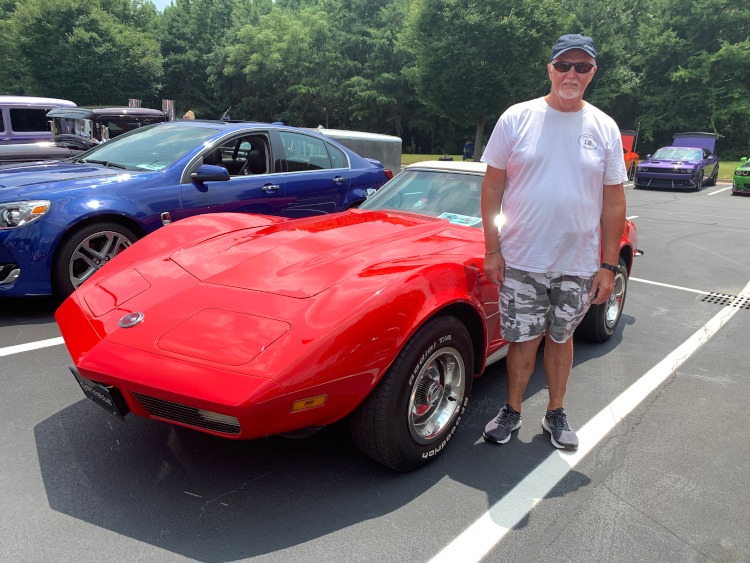 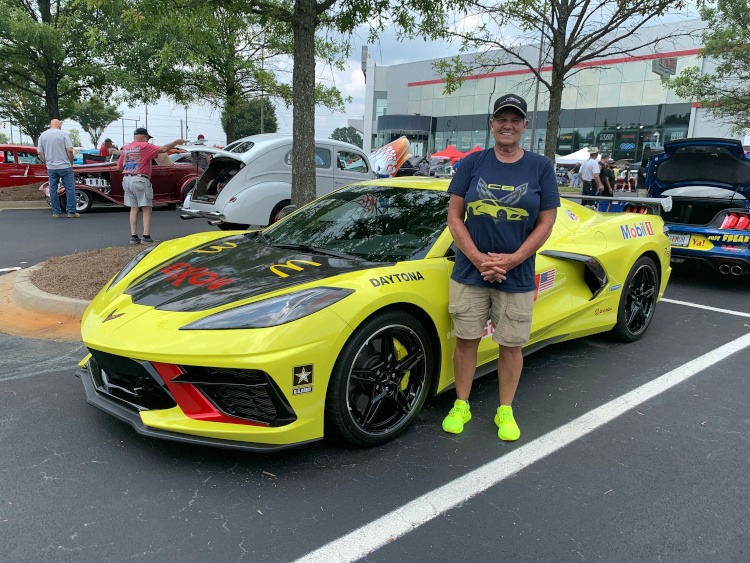 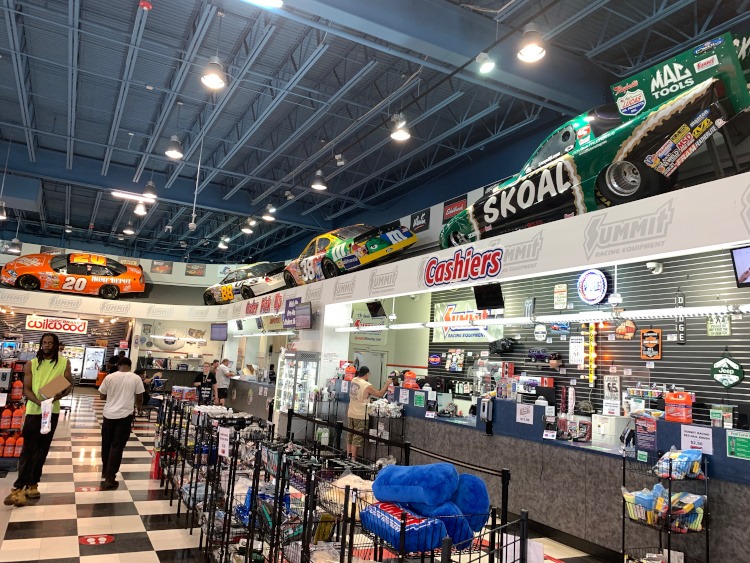 While every car racer and enthusiast has heard of Summit Racing Equipment, few realize the significance the Corvette brand had in its creation.
In 1968 a young engineer named Paul D. Sergi, Sr. was the proud owner of a 1967 427 big-block Corvette.

Like most young car enthusiasts, he looked for parts to make his stock Corvette even faster and more powerful.
In his search for aftermarket parts, he made manufacturing connections to get the parts he wanted at a discount.

Well, from there, it wasn’t long before the word got out to his drag racing buddies who also wanted discount go-fast parts.
So soon, Summit Racing Equipment began as a part-time parts business in Stow, Ohio.

Word spread quickly, and by 1970, they needed to move to a larger store in Akron, Ohio.
Back then, product lines offered include Holley, Mallory, Hurst, and Mickey Thompson.

And to think, this global business started from a young man’s need for speed in a 1967 Corvette. 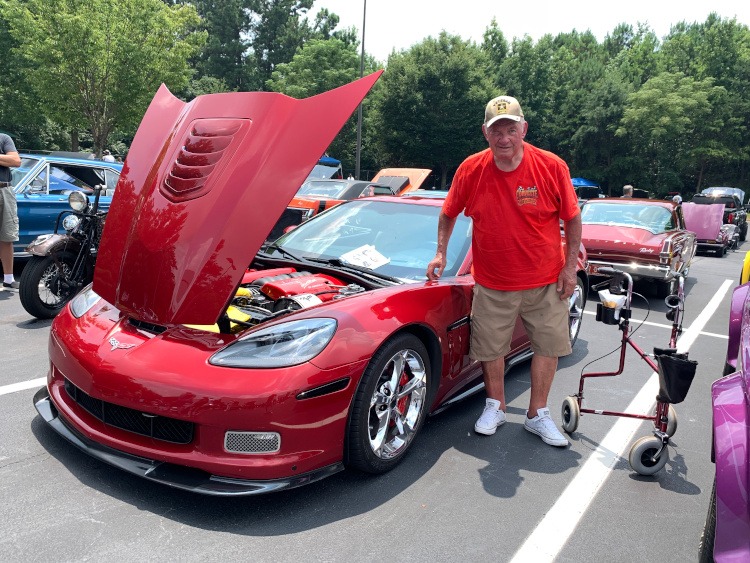 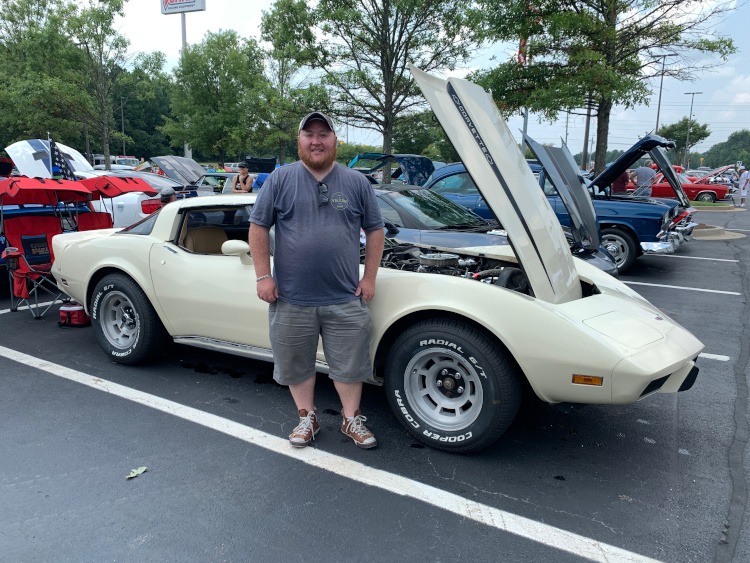 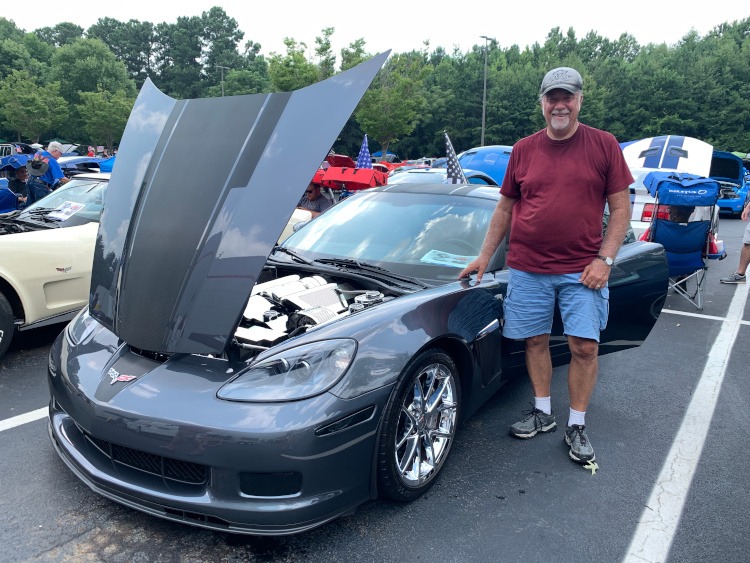 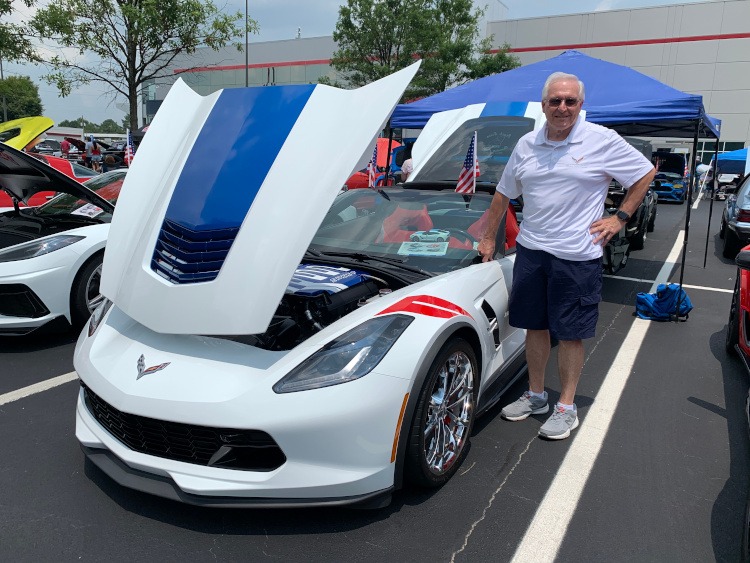 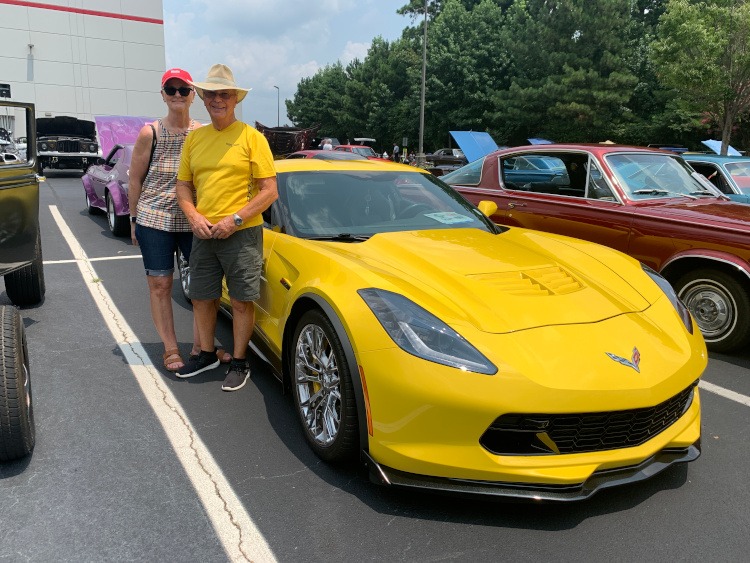 Several Atlanta area Corvette clubs made the journey to the Summit event, including those from the fun-loving Peach State Corvette Association.

Since 1979, this southern Atlanta association has always been about sharing the enjoyment, adventure, and fellowship from Corvette ownership.

As you may recall, Ed Tillirson founded this not-for-profit organization with a quorum of South Atlanta members from an existing Marietta club.

In addition to being club president, Ed was also co-editor of Vette Views Magazine.

We had a blast talking to PSCA members and seeing their beautiful Corvettes. Look for an in-depth article on this club soon. 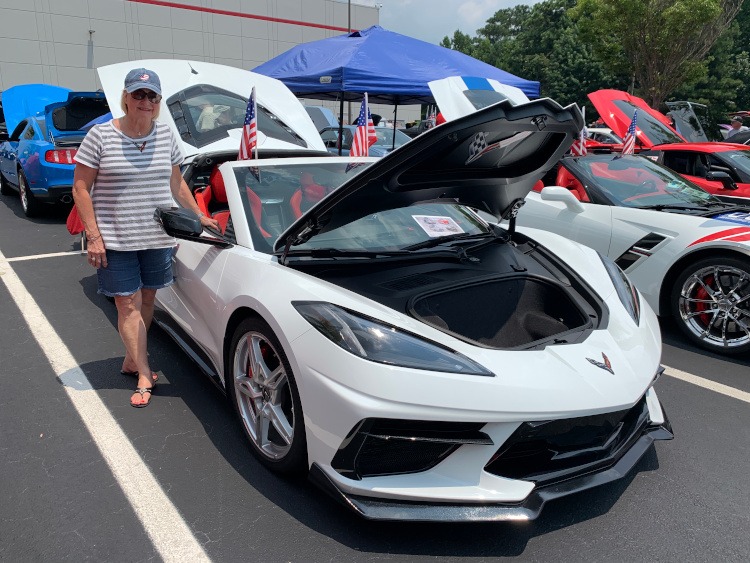 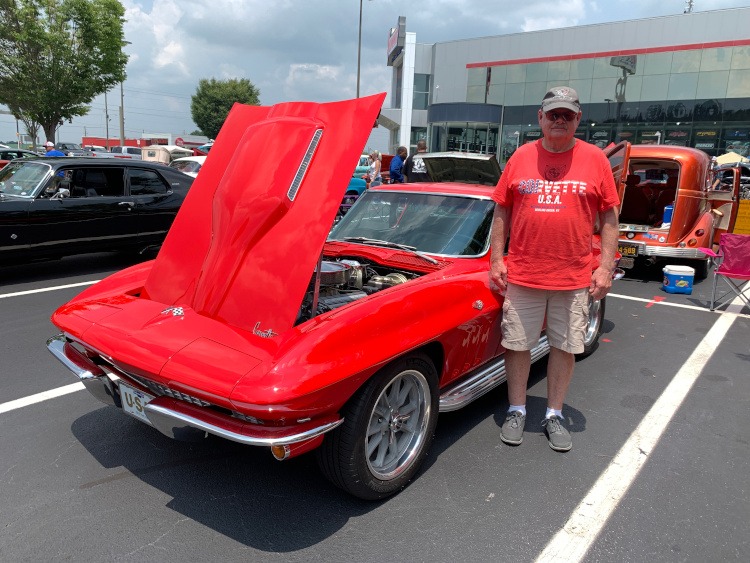 Supporting A Worthy Cause

Car shows like the Honor Flight event give us the privilege of honoring our nation’s veterans.
We’re thankful for the Georgia Street Rod Association taking on the daunting challenge of logistics and organization.

Special thanks also to Summit Racing Equipment.
Their unwavering support of those who’ve fought to defend our country doesn’t go unnoticed by racing and car enthusiasts.

For those lucky enough to attend, GSRA put on an exciting car show at the Summit Racing Equipment Retail Super Store located in McDonough, Ga.

*Special Note* You can still make a donation to Honor Flight by visiting the GSRA website, www.gsra.com. Click on the donation button and select Honor Flight to make your contribution. You can also donate by check (indicate GSRA Honor Flight Car Show) and mail to Barry Schumacher, GSRA treasurer, 2160 Soaring Lane, Lawrenceville, GA 30044.

© 2022 Georgia Street Rod Association. All Rights Reserved.
Back To Top