I have included more pictures of Metal Union and updates to projects shown in the previous story.

In preparation for creating this photo essay of Metal Union work, there was so much we realized we had missed. A second trip made all the difference in the world.  When we returned some 3 weeks later it was interesting to see how much the builds we photographed the first time had progressed. The Metal Union shop is very fluid and dynamic.

37 Lincoln Zephyr………. The extensive work on this Lincoln includes the molding of the gorgeous original headlight bucket assembly. Brandon explained that 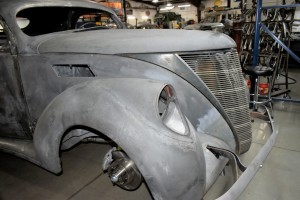 during factory construction, they placed the headlight buckets in the fender temporarily. At the end of the production line, artisans accomplished with solder and paddle techniques would fill the seams around the bucket. Later, a worker would grind down the solder to make the headlight buckets appear as though they were part of the original fender. Although there remains a lot of molding and detail work to be completed, it is obvious this car is well on its way to becoming the car of someone’s dreams. 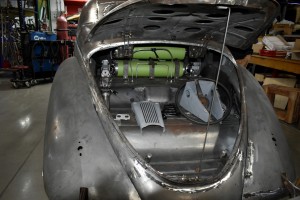 The light green cylinders located in the trunk cavity are the pressure tanks for the car’s hydraulic systems. This will allow the driver to set the ride height for driving, cruising, or on display during a show.    For those of you looking for parts for the Lincoln Zephyr, Metal Union manufactures parts for this car.   Check with them as to your needs.

Since the engine resides behind the driver, Metal Union had to come up with a way to cool the transmission lubricants. Notice the small radiator behind the air inlet. 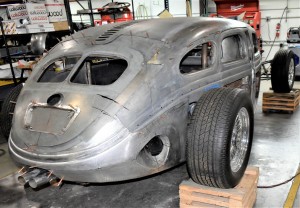 Originally this car would have had water drip rails just above the doors. They are being removed to clean up and smooth the appearance of the roofline. 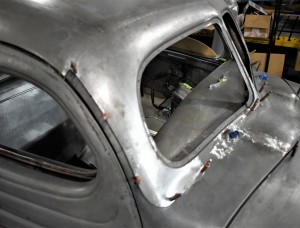 The windshield was originally one

piece. It has been modified into two separate windshields. The entire area around the windshield had to be modified to accommodate the slant towards the rear.  The car will not have the stock MOPAR crank out windshields. The smooth ducting located behind the tire on the body is designed to act as a source for cooling the radiator. This is yet another fine example of Metal Union’s craftsmanship.

The roof line of this detailed rod has a lot to point out. 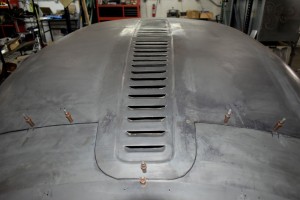 The crafters at Metal Union, needed to find a way to allow heat to escape the engine compartment. To accommodate this issue, a piece of the roof line just below the louvers was removed. Ducting was welded on the inside to drain away any moisture. All of the cleco type rivets shown will be removed as the body panels are welded and sanded smooth.

Since the Hemi engine is located in the rear, there is room up front for the radiator and a fuel cell. Metal Union believes strongly in the use of fuel cells in their builds. Included will be baffling in the tank to prevent issues caused by acceleration and driving on inclines. 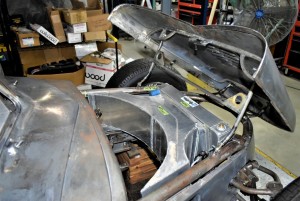 The car has been chopped, channeled, shortened, and narrowed. The front end will be handmade by Metal Union along with the roof and tail. The interior is scratch built and has been designed to fit the owner along with all the amenities of a modern car.

Notice how the beltlines on the doors have two ribs that originally ended on the body just behind the rear tire. Metal Union has extended two ribs all the way around to the back of the body making it appears as though it came from the factory this way. 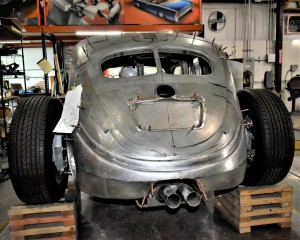 The thing to note here is the previously mentioned ducting of the exhaust pipes coming through a cutout. Also of note is the molded area where the license plate will reside. Just above the plate is a circular cut out for a light assembly that will contain running and brake lights. The turn signals will be located in the B-pillar and will be activated by a solenoid under driver control.

All that is left to do is everything else! 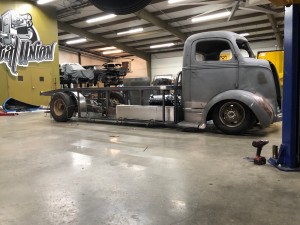 There will be extensive storage within the bed as well as a winch to load the Austin Healey 3000 and ’32 Ford Highboy that will reside on the back of this truck.   There are also plans for 4-6 motorcycles, too. 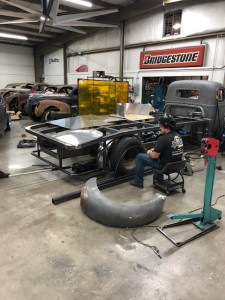 This is a picture of Field building the rear fender and inner tub.  This has been quite a challenge due to the air ride suspension and the truck being lowered for loading and parking.   How low can she go……….? 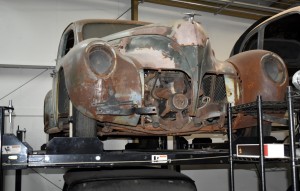 This is a 1939 Lincoln Zephyr waiting its turn in the magic shop on the other side of the building. One can only imagine what this rod will end up looking like. 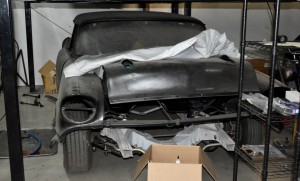 Here is a very straight looking 1957 Chevy also waiting its turn in the build shop. We would certainly love to return to Metal Union to see it during construction. Who doesn’t love a cool ’57 Chevy? 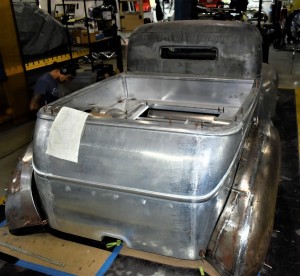 The view of this 1940 Ford pickup has a lot going for it. Check out the perfectly smooth and round form of the bed as it comes from the front and around the other side. We had a hard time understanding how this was done with so much perfection.

There are two Metal Union bead ribs done to the bed. The one in the middle is absolutely amazing in its construction. 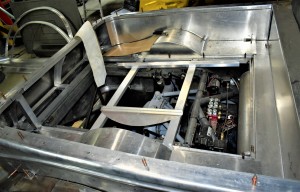 photo. When completed the entire bed of

the truck will hide all the mechanics that are shown below. 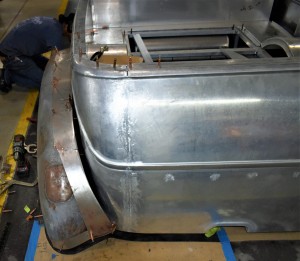 The driver side rear fender is currently under construction. When completed, the previous gas filler cover plate and all of the sections will be welded together to make it appear as though it came from the factory.  Also, take note of the lower cutout area where the exhaust will come through the body.

Notice how the passenger side fender looks after it has been pieced together to accommodate the widening necessary for the larger rear tires.  Check out the perfect form of the bed as it comes from the front and around the other side. There are two bead ribs done to the bed. The one in the middle is absolutely amazing in its construction.

Thanks to Art Ogg for his continued attention to detail and the writing of this story.

© 2022 Georgia Street Rod Association. All Rights Reserved.
Back To Top